Why the Duggars are Banned from Our House 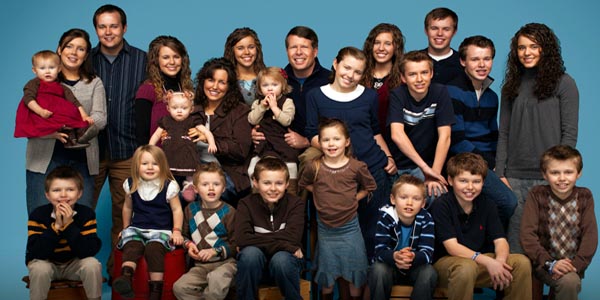 Many years ago, I remember hearing about this family with all these kids. Of course, I'm talking about the Duggar family. At the time I was a moderator on a busy message board and every once in a while, a post about them would pop up. Even back then, there was controversy. Did they get government assistance? Did they pay for their house themselves? How exactly does this family sustain itself?

People would debate, but then things would die down. My only real opinion of them was that the mom was bat-shit crazy to have so many kids, but if that's what they wanted and they could support them all, who was I to judge?

Fast-forward several years and they were a few seasons into their reality show with more babies coming every year it seemed. It was then that my daughter suddenly developed a fascination with the Duggars.

Suddenly, the show was on my TV...a LOT.

Before then, I hadn't paid much attention to them, but now they were in my living room what seemed like every day--skirts, long hair, smiling faces and all. And my impressionable teenage daughter was watching and taking it all in. At this point, I started to take notice.

She was being a witness to a patriarchal family raising their girls to be less than the boys. She was witnessing a father who ruled the roost and all the males in the family seemed to come ahead of the females. Kids were being "educated" by the same woman who kept popping out the babies with no regard to her health or worries about how to afford them.

My daughter was watching all the girls doing the cooking and cleaning while the boys did all the outside work and taking out the trash.  Ok, fine. These are traditional gender roles. What's the harm right?

Yeah, I kept telling myself that. I watched as the girls were forbidden to wear anything but dresses and skirts, so when one of the girls wanted to go rock climbing for her birthday, it created a very awkward moment for the man who was charged with putting her in the safety gear. Are you serious? How would it have been "immodest" to let that child put on a pair of pants to climb that rock wall. The alternative seems LESS modest to me.

I watched some of the older girls want desperately to go to college, but the curriculum their family used for homeschooling was a religious based one that taught very little science. That meant they couldn't pass the ACT to get into school and their dreams of being nurses were squelched. That's ok though. The girls know it's just a waiting game for them anyway. They can get training and hold jobs until they're married, but once they're married, it's their "wifely duty" to quit their jobs and only work to support their husband and HIS career and needs...and oh yeah, have lots of babies!

So I watched my daughter take this show in. The babies were cute. The kids were likeable. The whole family seemed nice. It seemed like an attractive way to live.

I didn't want her to ever think that if a man does something to her she didn't like, that's too bad. She'd just have to forgive him if he said GOD had forgiven him.

Yeah, that last part just happened, but the rest is true.

Odd thing is, my daughter is a smart cookie. She watched the show but her fascination with them ended when she heard about the robocall that Michelle Duggar made against transgendered people being able to use their preferred bathroom. She also lost respect for Josh long ago when she found out he spent his time campaigning against gay rights.

I'm proud that I never had to ban the Duggars from my house. My daughter was smart enough to do that for herself. I did something right.

The comments to this entry are closed.